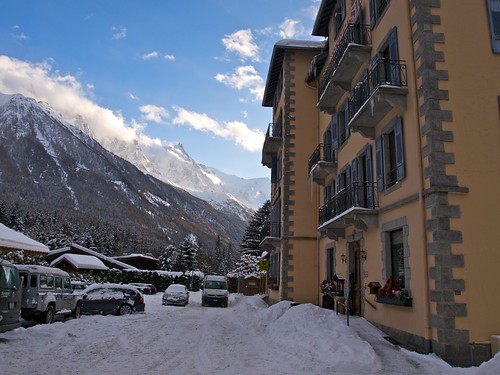 We stayed at Hotel Excelsior in Les Tines just up the valley from Chamonix and Les Praz. I spotted this charming hotel for it’s good value (€70 / night) and good reports on Tripadvisor. Some people on there complained about its location, but they’re amateurs because it has a fantastic location with both a railway station and a bus stop at the end of the road.

The only thing that annoyed me about this place was the fact that they had a very small ski shed and the Japanese Ski Team were staying there too and seemed to monopolise the place, not even moving aside to allow the other guests in. They just kept waxing and sharpening their edges as we tried to squeeze in to replace our kit. 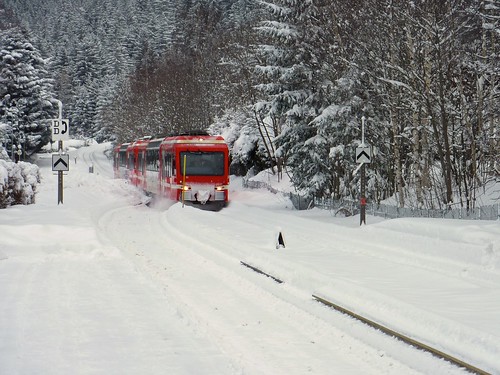 A superb way of getting up and down the valley, hugely underrated and overlooked by most holidaymakers (another bonus!). It stops at all of the major ski stations… what about Le Tour I hear you cry? Well, if you take the little train to Vallorcine you have a very quiet gondola ride to the Tete de Balme which is the best part of Le Tour anyway. Keep going and you can get to Martigny. Go the other way and you can get down to Les Houches and St Gervais. Most versatile.

Some heavy snow fell again in Chamonix giving excellent conditions but poor visibility. Jane and I enjoyed some piste and forest runs around Grands Montets on the first day. It was a Thursday so the lifts were good and quiet, we ate a good ski lunch in the Plan Joran restaurant, a highly recommended self-service.

On friday I took a guide, Xavier Vimal from the Compagnie des Guides in Argentiere. We skied the Argentiere Glacier along the classic left flank route, rejoining the Point de Vue piste just above the Lognan Refuge. The snow was in fine condition but the visibility was dreadful. 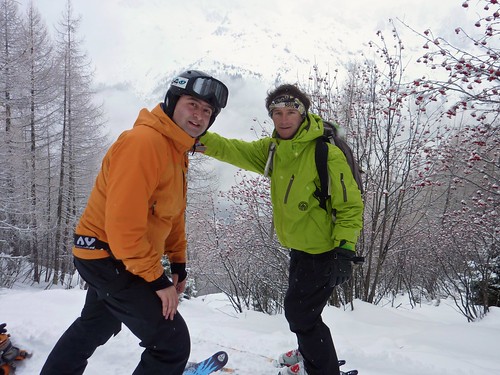 Next, we tackled the Combe de la Pendant, from the top of the Bochard accessing it from the Chamois piste’s uppermost section. The Combe contained deep choppy snow and was enjoyable. We continued down the Combe until it reached a plateau at the tree line and then took a difficult forest descent through the Foret du Lavancher. Real combat skiing through the varosses before joining the Grand Balcon Nord trail down into Le Lavancher itself. It’s a pretty little village with some very old and authentic chalets, it’s also rather unspoilt compared to some of the other villages in this valley.

Next Rosedale Abbey to Lastingham route

Previous Chamonix, a cold start to the season