Chamonix, a cold start to the season 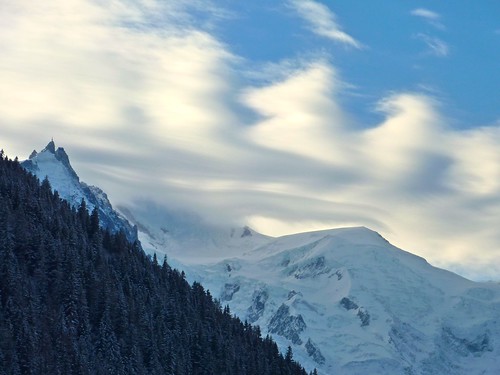 Jane and I headed out to Chamonix to celebrate my 30th birthday last week. I love visiting The Chamonix Valley before it all opens in December, and it has become something of a tradition in recent years.

This year the whole of Europe was blanketed in deep snow and Chamonix was experiencing perishingly cold conditions reaching -26 at the top of the Grands Montets.

The first day we skied at Grands Montets in near white out conditions but to constant hard falling snow which laid thick under foot. By the time we had done a run and taken a lift back up the tracks had been covered and new powder had set down. The snow was typical for very cold conditions in that it could not be melded together into pack and was very powdery. I didn’t really have the right wax on my skis for these conditions (cold wax advised) and experienced some sticking under the skis particularly when trying to skate on flatter sections.

Some excellent fresh tracks were had in the little couloirs in this sector, these are ideal for this sort of day when the conditions are too severe to head further off the beaten track as you always have the security of bailing out onto Plan Joran or following the Tabé chairlft.

Usually the opening day is very popular and the slopes are busy, but this year access to Chamonix was limited by the severe snowstorms across Europe, particularly hitting France and obviously preventing people from travelling since the slopes were totally empty. 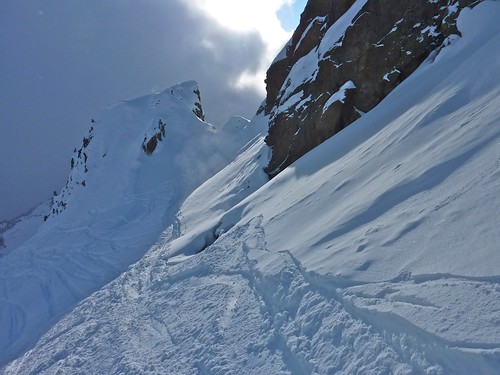 Unusually we were still hitting fresh tracks at 12:00, there was some wonderful deep fluffy powder skiing. I had a little misadventure in the Cornu sector when I lost a ski in deep snow on a 50 degree slope and fell quite a distance. The climb back up to retrieve my kit was pretty hairy.

The site of my misadventure 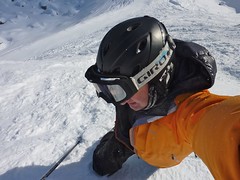 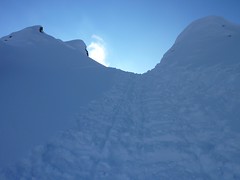 We enjoyed a nice meal with Simone and Wendy from Alpybus in Le Sarpé in Bois (nr Les Praz) which is a lovely traditional little wooden mountain restaurant. It is always reassuringly full of locals with Génepy on free pour.

For our final day of skiing we headed up the valley to Le Tour, I had the intention of skiing off the back of the Col de Balme down to Vallorcine to take Jane for lunch in the nice little restaurant in the train station, however there were aggressive winds damaging the snow so I opted against it, for the better. 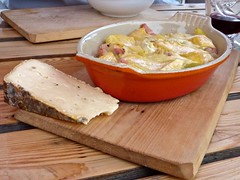 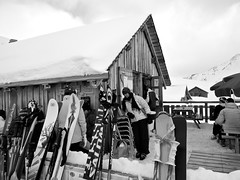 We joked about not being able to get home whilst skiing, but this in fact came true. During our descent to Geneva there were heavy snowstorms laying on the roads faster than they could be cleared and Swiss sent me an SMS informing us that the flight was cancelled so we spent the night in Geneva with Simone and Wendy and had a nice pizza.

The next day we arrived at the airport at about 0915 and Swiss put us on the next flight only 45 mins later, great service.

Next Chamonix, a short January trip